A person must be mentioned is legendary mythological director Babubhai Mistry.

Ashtalakshmi Vaibhavam (1986) narrates the backstories of all eight forms of goddess Lakshmi and her involvement in many interesting tales, including how Ravan usurped Lanka from Shiva and Parvati, how Lord Indra was taught a lesson in humility, how King Dasharath's daughter helped save his kingdom and how the virtually immortal demon Mahishasur was defeated.

Srinivas Kalyana (1974) tells the fascinating legend behind the famed Venkateshwar temple in Tirupati. Once sage Bhrigu paid a visit to Lord Vishnu in his heavenly abode, but he was oblivious to the sage's arrival while enjoying the company of his spouse Lakshmi. Furious, the sage kicked the Lord on the chest. Although Lord Vishnu forgave him, Lakshmi was unable to bare the insult and left Vaikunt for the earth below. In search of her, Vishnu descended to earth as Shriniwas.

Bhagwan Parshuram (1970) depicts the life of Parshuram, the sixth incarnation of Lord Vishnu. When Parshuram's brahman parents lose their lives as a consequence of the evil King Sahastrabahu's wicked schemes, Pashuram vows not only to kill Sahastrabahu but to exterminate all Kshatriyas to liberate the earth from their tyranny.

Tells the story of the sister goddesses Ganga and Uma, incarnations of the all powerful Adi Shakti who are born on earth to vanquish sin. Drawing from the Skanda Puran, this film magically interweaves many stories including Daksha Yagna, birth of Kartikeya and Ganesh, slaying of Tarakasur, and of course Bhagirath and the descent of Ganga. 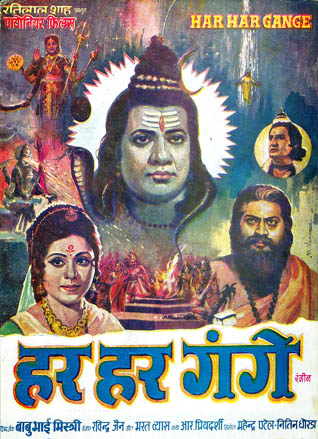 Shri Krishna Arjun Yuddh (1972) Pandav prince Arjun vows no one on earth can instigate him to go against Shri Krishna but must soon mince his words when he is compelled to take up arms against Krishna to protect his dance guru Chitrasen, whose irreverent behavior roused the wrath of Krishna himself. The subsequent war between Shri Krishna and Arjun not only threatens to end their friendship but the entire universe as well.

Sita Swayamvar (aka Sita's Wedding) depicts the divine birth of Ram and Sita, their childhood exploits and culminates in their marriage. 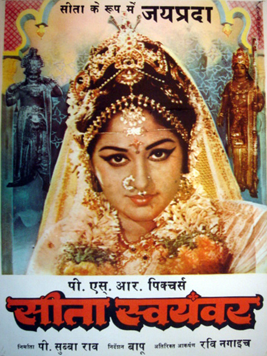 Shri Ram Vanvas details the trials and tribulations of their subsequent forest exhile during which Sita is abducted by Ravan, the demon King of Lanka.

Har Har Mahadev (1974) recounts stories from the Shiv Puran about Lord Shiva, his consort Shakti and their acts of compassion and wrath. Many episodes from their lives are shown including the sacrifice of Sati, immolation of Kamdev, wedding of Shiv and Parvati, origin of Ganesh and Karthik, descent of the holy Ganga, vanquishing of Bhasmasur and more.

Sati Naag Kanya (1982)  Two worlds collide when Meghnath, prince of Lanka marries Sulochana, daughter of the serpent Shesh upon who Lord Vishnu sleeps. When Meghnath's chariot inadvertently kills a snake, Sulochana endures the curse of the serpent's mate. The snake's untimely demise results in a prophesied battle of good vs. evil when Vishnu and Shesh Naag incarnate on earth as Ram and Lakshman to square off with Ravan and Meghnath.

Vrinda is caught up in a holy war when her husband Jalandhar discovers the gods tried to steal the nectar of life and decides to aid the demons in the conflict. A skilled warrior, Jalandhar defeats the gods but upsets his wife when he claims several beautiful women as his prize. Yet despite his indiscretions when Jalandhar is hurt in battle, the gods find Vrinda's anger more fearsome than her husband's prowess in combat. 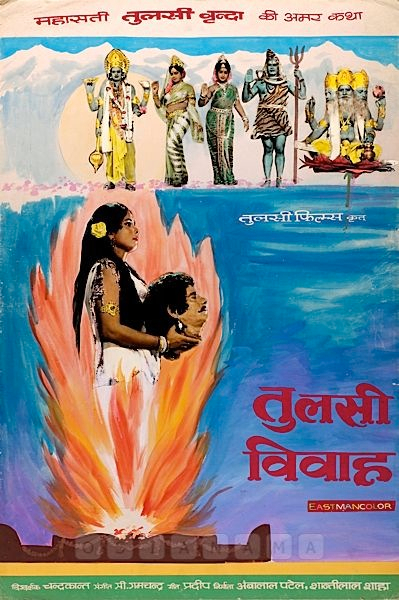 Balram and Krishna argue over who their younger sister Subadhra should marry. Wishing to see his sister as Queen of Hastinapur, Balram wants her to marry prince Duryodhan, while Krishna is partial to their cousin Arjun and enacts a plan to see his desires fulfilled. Can Krishna and Balram settle their differences, or will their persistent feuding spell the end of the illustrious Yadav line? 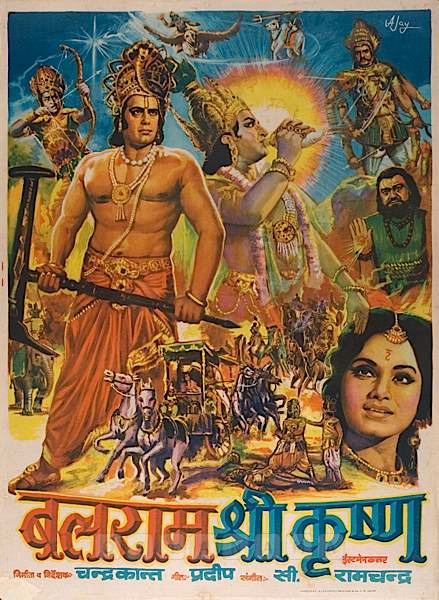 Jai Dwarkadheesh (1977)  When Lord Krishna inadvertently looks at the moon on Bhadrapad Chaturthi, he falls victim to Ganesh's curse and is accused of stealing the famous Symantaka gem. As Krishna tries to free himself from the false allegation, a bizarre series of events unfold leading to his marriage with Rukmini, Satyabhama and Jamvanti, the first three of his many wives.

Krishna Krishna (1986)  Jealous of the fame and fortune Krishna had acquired and incited by his flatterers, Paundrik, the ruler of Chunar, declared himself to be the real Krishna and true incarnation of Lord Vishnu. Paundrik targets Sudama, Krishna's greatest childhood friend which ultimately leads to a long overdue reunion between the friends.

Eecounts anecdotes from the life of Hanuman including his victory over the planet Saturn (Shani), his crucial role in the rescue of Sita, events ensuing after Ram and Sita's return to Ayodhya and the battle between Ram and Hanuman. 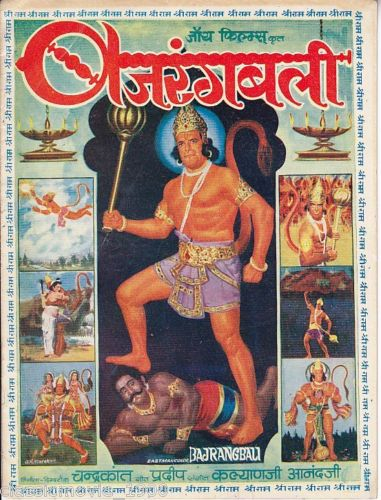 Hanuman Vijay (1974) tells a little-known story from the Krittivasa Ramayan of Ram and Lakshman’s kidnapping by Ahiravan, the ruler of the subterranean netherworld (Patal). A powerful sorcerer, Ahiravan planned to sacrifice the brothers at the altar of Goddess Kamaksha from whom he had obtained vital occult secrets. Once again Hanuman must save day with his wit and antics.

Mahabali Hanuman (1981) focuses on both the childhood exploits and adult adventures of Hanuman. As a child Hanuman mischievously tried to swallow the sun, thinking it was a fruit. When he is smote for his unwitting trespass by Indra, king of the Gods, he lays lifeless, only to be resurrected and granted gifts by an assemblage of gods. These gifts along with his own virtues earn him the title of Mahabali, or The Mighty One.

Jai Santoshi Maa is a 1975 low-budget devotional Bollywood movie that became one of the top blockbusters of the year. Usha Mangeshkar, sister of Lata Mangeshkar sang devotional songs for the film.

The film enjoys the coveted title of being one of the most successful devotionals ever made in Bollywood. Such was its craze that it is believed to have turned cinema halls into “temporary temples.” Viewers entered cinema halls minus their footwear, carrying flowers as an offering for the goddess and bowed down in reverence each time she appeared on screen. Such level of obeisance was never previously seen for any other devotional film made in Indian cinema. 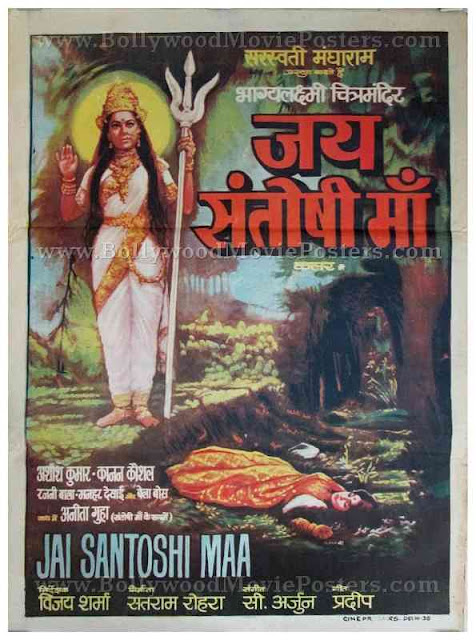